KITTE is a new shopping mall which opened March 21 2013 in front of Tokyo Station.

A new shopping mall named “KITTE” opened in front of Tokyo Station on March 21 2013. Many stores, restaurants and a tourist information center are there. KITTE connects to Tokyo Station directly in underground.

END_OF_DOCUMENT_TOKEN_TO_BE_REPLACED

Around the Imperial Palace

END_OF_DOCUMENT_TOKEN_TO_BE_REPLACED

What is Roppongi Hills

Roppongi Hills is a redeveloped place where is an old and crowded residential district at Roppongi. There are high-class apartments, aggressive company offices that have edges, a luxury hotel, a flagship TV station in Japan, a radio station for Tokyo, many high fashion stores and restaurants, movie theaters, a museum and an observation deck in Roppongi Hills. Above all, a big and tall building called Mori Tower is a landmark of Roppongi Hills.
END_OF_DOCUMENT_TOKEN_TO_BE_REPLACED

Tokyo Big Sight is a large international convention center. It is located Ariake close Odaiba in front of Tokyo Bay. Various events and exhibitions will be held there. And it is also the goal of Tokyo Marathon every winter.

There are two large venues in Tokyo Big Sight. West Hall is an iconic building which is made up with four characteristic inverted triangles. And East Hall can be divided into up to six small venues.

END_OF_DOCUMENT_TOKEN_TO_BE_REPLACED 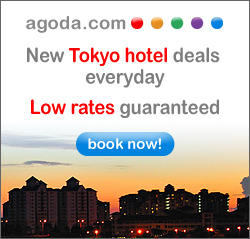